A Home Away from Home

Scores of engineering students from India have found a home — indeed, family — at USC Viterbi over the decades, whether at AIS, ISA, a research lab or in the classroom. That sense of belonging and connected-ness, along with the analytical skills they acquire over the course of their studies, has propelled many alumni to greatness. Following are some of their stories. When Radha Ramaswami Basu arrived at USC in 1972, the 21-year-old Indian native knew nobody and had just $8 to her name. Although she had a place to sleep, Basu needed to eat on that paltry sum until her teaching assistantship began a month later.

Nothing if not resourceful, Basu, M.S. EE/ CE ’74, found a schedule for upcoming department orientations and attended scores of them, knowing that food would be served. “So many nice people fed me and then handed me doggy bags to take with me,” she recalled. The professors, students and administrators Basu met also expressed a deep interest in the background of one of the few international students on campus. Basu appreciated USC’s welcoming ambiance and openness to diversity.

Armed with a USC Viterbi degree, Basu has had a distinguished career. She spent 20 years at Hewlett-Packard, opening the company’s Indian operations in 1987 and later helping expand its electronic business software unit to a $1.5 billion operation.

In 2013, she founded iMerit, a technology services company in the artificial intelligence and machine learning space, with seven centers in India and one in New Orleans. Basu decided then to offer life-changing opportunities to marginalized Indian youth, just as the USC community had once embraced the young Indian woman with the British accent all those years ago.

iMerit has since hired and trained thousands of marginalized, high-school youth in some of the world’s leading technologies. Today, nearly 80 percent of iMerit’s 2,500 employees come from underprivileged backgrounds, with women comprising half the workforce.

“They are full of hope, energy and have a can-do attitude,” said Basu, adding that iMerit only has a 5 percent annual attrition rate. “They tell me, ‘I can dream now.’” 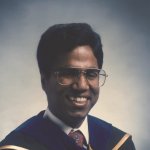 In 2010, Ashok Das, Ph.D. ME ’93, visited his niece in his hometown in the northern Indian state of Bihar. He asked her what kind of present she wanted.

“She said, ‘Uncle, I have everything. Just give me light and electricity,’” said Das, a member of the USC Viterbi India Advisory Board.

Some 200 million Indians, mostly in rural villages, remain unconnected to the national electrical grid. They have unreliable, if any, access to power, sometimes only expensive solar panels that require constant maintenance.

His niece’s request inspired him. In 2016, SunMoksha — the Bengaluru, India-based clean energy solutions company Das founded and runs — developed and deployed the nation’s first smart nano-grid system to power the village of Chhotkei.

Das credits his USC engineering education with giving him the knowledge and analytical skills to become a successful entrepreneur. In 2016, SunMoksha won first place in the “Smart Village” category at the Smart Cities India Awards. And the future looks bright. 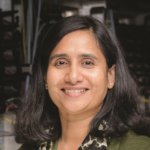 As a Ph.D. student at USC Viterbi, Sujata Banerjee planned to study communications theory in the Communications Sciences Institute. Then she discovered computer networks and “never left that research area since.”

For more than 25 years, Banerjee, Ph.D. EE ’93, has made important contributions to making networks more reliable and simpler to run. The holder of 33 patents, she did so first as a tenured professor at the University of Pittsburgh, then as a research director at Hewlett Packard Enterprise Labs and now as a research director at VMware Research – a Palo Alto-based provider of cloud computing and virtualization software and services.

In 2018, N2 Women named Banerjee to the “Stars in Computer Networking and Communications” list. “I think I’ve been pretty lucky to be part of a couple of revolutions in networking,” said Banerjee, referring to software defined networking and network functions virtualization.

Born in the U.K. but raised in Mumbai, India, Banerjee said USC Viterbi changed her life.

“I met my husband (entrepreneur Vibhu Mittal, Ph.D. CS ’93) there, people from all over the world and received an excellent education,” said Banerjee, who recently joined the school’s Board of Councilors. “My time at USC helped make me who I am.” Growing up in Mysore, India, Narendra Narayanan, M.S. EE ’85, learned an invaluable lesson from his father.

A psychiatrist and research scholar, his dad often treated children with mental disabilities with kindness and respect. He taught Narayanan that such people should be dealt with compassionately and integrated into mainstream society.

Years later, while studying at USC Viterbi, Narayanan said that Americans’ relative acceptance of people with physical and mental disabilities, as well as his fellow Trojans’ celebration of diversity, reinforced his commitment to inclusiveness.

So when he founded Vinyas Innovative Technologies Pvt. Ltd., a group of global electronic manufacturing and assembly companies, Narayanan championed people with disabilities.

Since 2007, the Mysore-based company has trained and hired physically and mentally disabled workers. Of Vinyas’s 500 employees, 70 are hearing impaired, 10 to 15 are physically challenged and 13 are intellectually challenged.

“The kind of personal satisfaction I get from this is immense,” said Narayanan, a member of USC Viterbi’s India Advisory Board and the 2014 winner of USC’s Widney House Volunteer Award. “That’s why I do it. He learned about alternative energy and materials science, the foundation of his future business, under the direction of his doctorate adviser, Dan Dapkus. He also met his future wife, Rupal Fadia, M.S. CS ’95.

“Everything solar and LED is what I learned at USC Viterbi,” said Uppal, founder and managing director of Intelizon Energy Private Ltd., a renewable energy company based in Hyderabad, India, that has pioneered new lighting products that combine solar and lithium ion-based LED technologies.

Intelizon’s products have brought light to rural and semirural communities in his native India and Africa. The company’s energy solutions make it possible for children to do homework late into the evening — without the fire risks posed by candles and kerosene — and for women and others to feel safer walking around their villages at night.

“When you see the difference, see the happiness on people’s faces, that makes it all worth it,” Uppal said. For the past 28 years, he has made his mark academically, professionally and administratively as a proud Trojan. He has risen through the ranks as a graduate student, postdoctoral fellow, research professor, computer science and electrical engineering professor, chair of the computer science department, and now USC Viterbi’s executive vice dean.

“I enjoy being here at USC Viterbi. We’re a top 10 engineering school, and the work environment is excellent,” said Sukhatme, the founding director of the USC Robotic Embedded Systems Laboratory. “When I occasionally had opportunities to move elsewhere, I decided I was significantly happier here.”

Along the way, the Fletcher Jones Endowed Chair of Computer Science has won recognition for his research on multi-robot systems and robotic networks. Sukhatme is a fellow of IEEE and AAAI, a member of the ACM and a recipient of the NSF CAREER Award.

As vice dean, he has overseen a number of important initiatives. They include guaranteeing four years of financial support for Ph.D. students, realigning undergraduate and graduate student services for better integration and less fragmentation, and realigning IT and distance education technology services in the school.

“USC has a culture of welcoming international students,” Sukhatme said. “I think the quality of our faculty, their research and our superb educational offerings really draw them in.”